Since my early age, I have been moved from deep inside by a strong urge to understand.

During my youth, questioning the meaning of the self, of the world, and of the purpose of life remained at the centre of my thoughts. It seems to me that I had no choice, that my existence had no other path to follow than this very one. I was a sensitive child, I could feel the world around me with intensity, and I had an acute perception of the transient nature of life.

My natural tendency to go deep inside was the starting point of a lonely journey of more than 30 years, towards discovering the mystery of the eternity hidden inside of us. Books, numerous books, help me along this progression. My mind explored with intensity all the answers before understanding that the mind was not the most appropriate tool to achieve endless freedom. It is only when this quest was dropped that I was able to discover what I was looking for.

The achievement was reached on the spot, in 2006, while suffering from a serious illness. I was able to contemplate the true nature of an immortal and unlimited consciousness.

In that state so close to death where I was, my own consciousness, pure, empty of any objects, was mere consciousness conscious-of-itself, connected to a luminous flow, almost dissolving in it. Wide open, limitless, it embraced the space of the entire universe. The sensations were soft, peaceful. Time had dissolved. I was in peace, as if I had always been here.

The consciousness had gone to another plane of reality. The light passing through it did not belong to a separate world anymore: that light was the substance of the consciousness itself.

I knew that what was perceived was arising from my own consciousness. I was going through a non-dual reality; there was no more distinction between the perceiving and the perceived entities. The perceptions themselves were pure expressions of my consciousness radiance.

Everything was clear. A deep and subtle understanding of life, which gave me the feeling to belong to a meaningful cosmic unity, overwhelmed me, without limit. I was taught by the silence of emptiness, with infinite love which let me simply be.

The consciousness is the impulse, the movement which organises live, which creates the infinite variety of shapes. It is the dance of the emptiness.

Everything exists because of its limitless power. It is the matrix which fertilizes all things. Each phenomenon arises from it and returns to it. It is the one source. We are all born out of it. We are its expression.

From the consciousness arises unconditional love, without object, without direction, which penetrates everything. It is the cosmic energy which goes through, animates and carries us. One expresses it as soon as one perceives the unity of life.

The thought stems from the same energy spring. However, in its fragmented approach of the reality, this origin is obstructed.

There is nothing to do to be what one is from all eternity. Any effort is a stretch of the mind toward acquiring something. The Truth can’t be the subject matter of a quest or a meditation. Nothing exists outside it.

It is only when one lives in one’s completeness - the consciousness space - that the energy of life, expressing the infinite flow, can freely expend inside. It has no other target than itself. Then our acts spring spontanesously from this out-of-time emptiness As long as one dwells “in consciousness” in this space, one feels that one is getting established, because this is one’s own substance that one achieves. Our true nature is not a state. It is the continuous deployment of life in our space of peace and silence.

The intelligence acting inside the energy of life takes care of us. It is not our duty. It takes us where it wants. Our existence on earth tells the story of life which search for its accomplishment through us, patiently, with love. We have risen from its original vibration. We are the universe from the point of its vibrating source, from which the energy springs. There lies the root of the consciousness.

Life lies in consciousness. It can only develop in an empty space, limitless potential, which is our true nature. This is the mystery to discover. There is no other mystery.

We are consciousness; this is our only and true identity, for all eternity. We are its infinite movement, out of time. Let’s look at ourselves as being this flux without beginning or end, let’s harmonize our rhythm with its eternal pulsation.

There is one call only, that of the eternal space inside ourselves. It is our true substance, the empty area of the unique pulse of life. This reality is nowhere else than where we live. Its eternity is disclosed at every moment.

Let’s stretch towards the outside, let’s take an active part in the world, knowing the world as a game, while we keep on reflecting inside ourself. Back and forth are both movements of the life.

Let’s have the courage to get rid of all the society pressures and let’s go and discover the reality on our own. This is human dignity to link ourselves, in consciousness, to the essence of our being.

Let’s simplify ourselves, let’s shed ourselves, and in this emptiness, we are bound to discover the intelligence of life in action. 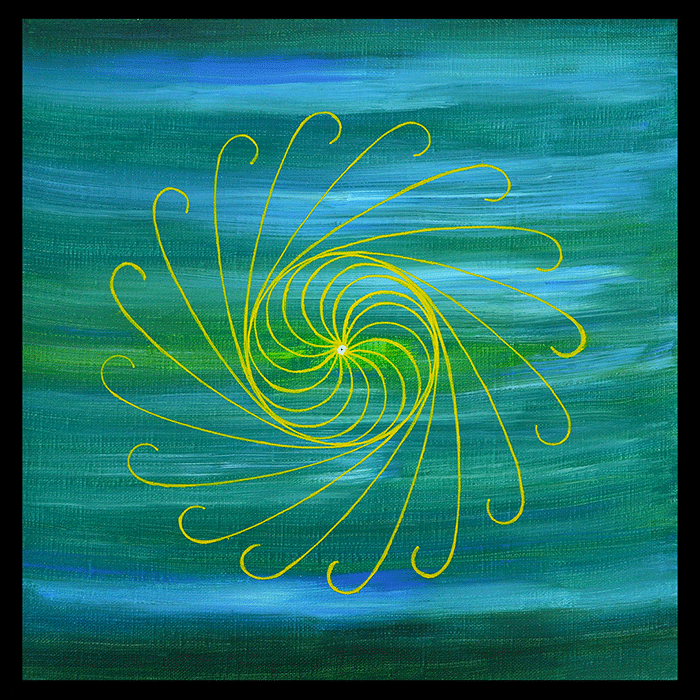